Parts Galore: Choosing the Best Parts for Your Gaming Rig

Right now, we’re in the middle of a pandemic. Because of the quarantine going on, our movements and some activities are restricted. As a result, most of us are staying inside the safety of our homes. Admittedly, one can get easily bored while waiting for the days to pass. Although you can watch your favorite tv series, watch your favorite movie, or read a book, nothing beats playing video games. 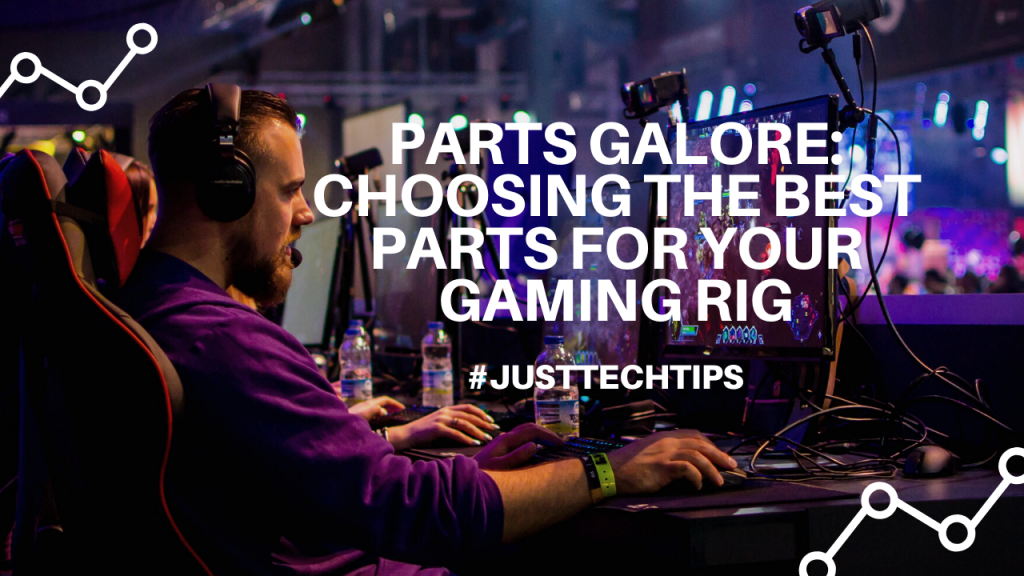 With video games, you’ll have more interaction than just watching a movie. You’ll have more excitement compared to turning the pages of your book. Games like Dota 2, Call of Duty, and PUBG are just some of the games you can play. All you need is a capable PC, a stable internet connection, and you’re good to go.

However, even before you start downloading these games, do you have a capable PC? If not, you’re in luck. In this article, we’ll help you build your gaming PC. Don’t worry if you’re on a budget. We’ll be covering both mid-range and high-end builds on this list, and we’ll go through this part by part.

We won’t cover low end builds because it’ll cost you more in the long run through upgrades and even repairs. We also won’t include RAM(we’ll set all builds to a default 16GB) and PSUs in this guide. Lastly, we won’t cover peripherals such as monitors, keyboards, and other stuff. Without further ado, here’s our guide to building your own gaming PC.

If you want an incredibly fast machine, you’ll want to have an SSD or a solid-state drive. This storage device is much quicker than a traditional HDD. SSDs don’t have moving parts, so they don’t get damaged in time like HDDs. Some of the best SSD for gaming are Samsung 970 EVO Plus SSD 500GB, WD Black Internal Gaming SSD(any variant), and the Crucial NAND SATA 500GB.

If you’re asking which is the fastest SSD on this list, then this has to go to the Samsung 970 EVO Plus SSD. Samsung is known for its speed, and no SSD comes close to Samsung’s 970. Although it can get a bit pricey, the extra boost in speed is well worth the additional cost.

No matter what type your build is, whether it’s low end or high-end, you should always consider buying an SSD. To make your games load even faster, install them on your SSD for faster writing speeds. If you have an extensive gaming library, you may want a 4TB SSD, so all your games run smoothly.

Although some people consider HDDs as relics when it comes to speed, its storage capabilities are still useful. HDDs are more prone to wear and tear because of their moving parts. Get an HDD if you want extra storage for your PC. Having extra storage is always welcome. You can get HDDs from reliable companies such as Seagate, Western Digital, Toshiba, etc.

Your processor is the brain of your build. Without it, your PC is just a heap of parts just lying around. For a midrange build, Intel’s 9th generation i5 processor hits the spot. The Core i5-9400 comes with integrated graphics, the Intel UHD 630 iGPU. This addition means you won’t need to buy a separate graphics card for your processor to start working.

Be warned, though, Intel’s integrated graphics don’t do a good job when it comes to playing games. If you still want to purchase the 9th gen Core i5 but don’t want the integrated GPU, go with the Intel Core i5-9400f.

Although Intel’s processors aren’t pushovers, AMD processors are more focused on gaming. This fact brings us the AMD Ryzen 3 2200G. Ryzen 3 is also more affordable compared to the Core i5. Perhaps a small advantage Ryzen has over the Core i5-9400 is the Vega 8. It’s Ryzen’s onboard GPU and outperforms UHD 630 by more than 50%.

The high-end part is where things get bloody. Overall, the Intel i9 trumps the AMD Threadripper by just 21%. If you think that’s too much, and that the Threadripper is outmatched, you have it all wrong.

If the processor is the brain, then you can say that your GPU can be the soul. You’ll need a GPU if you plan on buying processors that don’t have integrated GPUs. For the mid-range build, the GTX 1660 6GB is the best.

Although there are other GPUs with 4GB of memory, we all should set the standard at 6GB, with 8GB being the best. With a 6GB card, you can safely play games such as Red Dead Redemption 2, Call of Duty, Monster Hunter: World, and many more games.

Let’s cut to the chase. If you don’t have any objections with price, then go all-in with the RTX 2080 Ti. This beast can do 4K resolutions at 60fps with any game. The RTX 2080 Ti is considered to be the fastest non-titan GPU in the market.

Consider replacing your 1080p monitors with something much better, as this GPU is overkill for those monitors. Get a better monitor that supports 4K to get every ounce of power that the RTX 2080 Ti provides. When someone jokingly asks you: “But can it run Crysis?” Answer them by pointing towards your RTX 2080 Ti.

Nowadays, we’re all getting bored waiting for the pandemic to die. One great way to do that is by playing cool video games such as Red Dead Redemption 2, Crysis, Ori and the Will of the Wisps, and so much more. However, what if you don’t have the specs to play those kinds of games? If you’re planning to upgrade, then the guide above can be useful. Game on!

Save That Money: 5 Best Waterproof Phones That You Should Buy

Learn How to Select The Best Gaming Laptop?